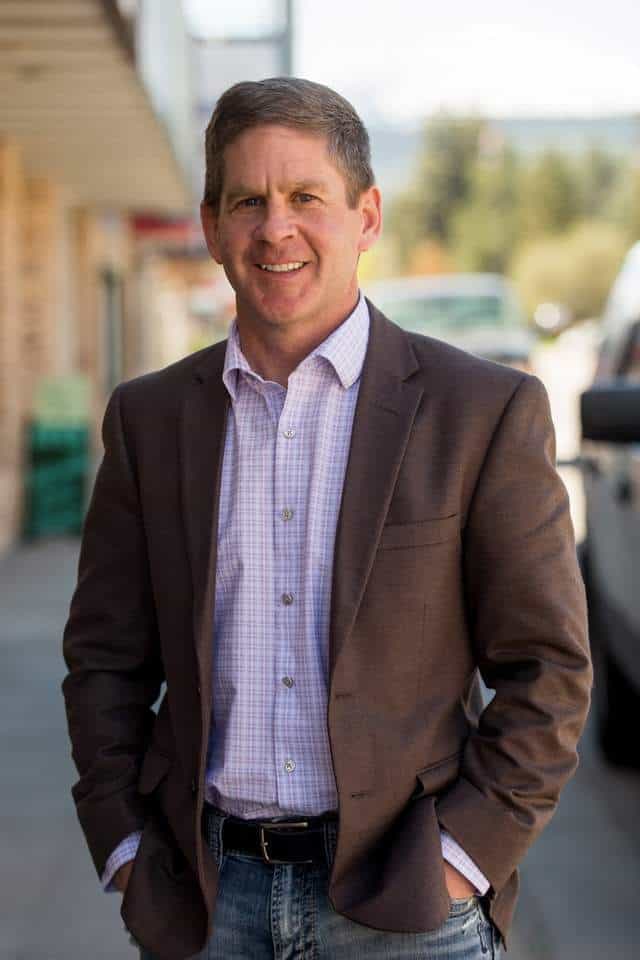 About two and a half years ago, “Things that Matter” was launched by Corey Stapleton, Montana Secretary of State (SOS). He swung into Red Lodge on Wednesday, May 2 and stayed two days in the county meeting locals and doing a roundtable at Carbon Fork for local businesses (no-host lunch) on Thursday, May 3. Stapleton, who is also a candidate for governor, stopped by CCN that morning to talk about his SOS tour.

Traveling the state is something he started in 2017 when he took office, about “two and a half years ago.” Stapleton says he brings two employees, “different ones each time.” Stapleton says, “The Secretary of State’s mission is to promote democracy, help commerce thrive, record history for future generations. Imagine before computers, the SOS kept records of all the things the legislature does, all the things the government does. We write rules. So when the legislature says you can only drive 35 miles (mph) on this road and Carbon County says we have special needs, we might come in and write a rule that clarifies. We write administrative rules and we make a little money doing that. We get no taxpayer money.”

When asked wouldn’t Carbon County taxpayers pay if by that example the county needs specific rules, he replied, “Technically, yes, indirectly, yes.” He said such charges constitute a total just 5 percent of SOS money. He said the rest of the Secretary of State’s money comes from: “Eighty-five percent from businesses (filings, etc.), 5 percent from records management (We store things on behalf of government agencies.) and we make a little money off of elections.”

Stapleton explained when they file initiatives, etc., “We don’t make very much, we lose a lot of money off elections.” He said his tour of Car-bon County, “has been really amazing. Everywhere we go we stay for two days. We met with the elections clerk, county commissioners, talked about upcoming changes in the new voter registration system. Specifically, each polling place in Montana is going to have a new, approved, smaller, easier to use voting mechanism for the people who are disabled. That’s required by federal law.” He’s also overhauling the state’s voter registration system “which benefits everybody in the county. We received some money last fall from Congress-HAVA- Help America Vote Act, and we’re putting a good portion of that to a new system. The central depository of all the information. We have 700,000 registered voters. That’s been clerks, 56 counties, are the people who update and keep that so we’re transfer-ring that data. (It’s) also much more secure, more safe.” They are keeping paper ballots. Carbon County Election Administrator Macque Bohleen said her office would still determine county voter registration qualifications. Stapleton said, “I’m really proud of the security.” He visited Red Lodge High School and was impressed with teacher Kevin Connor’s Government class. “Awesome. One of the best high schools I’ve seen.” Around town, “We met with Crazy Creek. I’m one of five members of the Land Board. We talked to Red Lodge Mountain about the swap and the potential trail at the old ranger trail.” He noted, “The integrity of elections is really important. It’s something I think about and we constantly work on it.” He spoke of the Ballot Interference Prevention Act.

“We really reduced the number of ballots signed by other than the registered voter.” He said a total of 367 bal-lots were mismatched state-wide and mismatched ballots were reduced 30 percent the next year. The law has changed and now people can’t return more than 6 ballots for others. He said some nursing homes previously collected more ballots. “That’s a work in progress.” Stapleton did not mention his gubernatorial campaign. Stapleton had a favorable impression of Carbon County and Red Lodge. “My takeaway is we talked about the culture there. The culture of being able to do that is intentional, the whole school coming to support the students (at a rally). You take that for granted. That does not exist everywhere. It’s been encouraged all along… You’ve got a good education system here. The people are all in.” He noted, “It doesn’t hurt that you’ve got a beautiful building and world class views. That bodes well for the future; you’re building great young kids.”
He concluded, “That’s what stood out to me. The high school experience is one of the best in the state.”