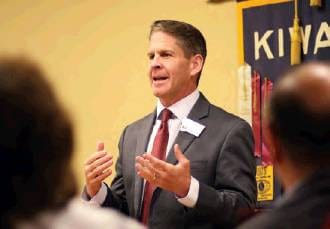 Photo by Andrew Turck: Montana Secretary of State Corey Stapleton speaks to local residents involved in businesses throughout the county during a roundtable meeting last Thursday afternoon at 3 Brothers Bistro in Hardin. During the discussion he drew not only on his political experience, but also from his time as owner of Stapleton Financial Group in Billings. 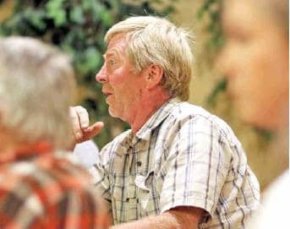 Photo by Andrew Turck: Douglas Kurth of Hardin speaks on his desire for Montana to retain more of its agricultural products for use in-state. Kurth has more than 35 years’ experience working in feedlots.

Among Corey Stapleton’s favorite quotes is one attributed to the late Peter Drucker, a management consultant, educator and author whose writing helped form the modern idea of a business corporation. The quote, which he said twice for emphasis during a meeting last Thursday at 3 Brothers Bistro in Hardin, is “Wherever you see a successful business, someone once made a courageous decision.”

“Every person who goes on to great things always has the same path,” he said. “There are lots of obstacles they choose to overcome, they refuse to be a victim [and] they don’t say they couldn’t get anywhere.”

Stapleton, the Montana secretary of state, made Big Horn County the 17th stop in his “Things That Matter” outreach tour. This campaign, his website states, set out with the goal of better understanding Montana by “spending time in every county, promoting democracy to all ages, helping commerce thrive in every town and immersing in the unique cultures of each… community.”

He likes to take two days for each county, Stapleton said, to allow a thorough overview of the challenges and opportunities available for businesses in the area. His knowledge of business doesn’t simply come through politics; he founded the Stapleton Financial Group in Billings and has served as a financial advisor there for more than 20 years.

Starting Wednesday, Sept. 12 in Big Horn County, he met with the students of Hardin High School, and County Clerk and Recorder Dulcie Bear Don’t Walk. He also visited Little Bighorn Battlefield in Crow Agency and toured Westmoreland Coal Company. 3 Brothers was his last stop, where he spoke to around 20 people who owned or were involved in businesses throughout the county.

Dan Willoughby, owner of Dan’s Custom Designs, brought up a challenge shared by many Hardin businesses: It’s difficult to bring in local customers when residents usually shop about 50 miles away in Billings. Willoughby, who runs his engraving operation outside city limits, said he didn’t see the point of investing in a building along Hardin’s business district, especially given that “90 percent of my business is e-commerce.”

Douglas Kurth of Hardin added a statistic to the discussion also used for “The Montana Ethic Project” video series by the Property & Environment Research Center: Less than 10 percent of food eaten in Montana comes from Montana. According to Dawson County Extension Agent Bruce Dawson – featured in the 2016 video – through exporting 90 percent of agricultural production, “we are leaving $2.7 billion on the table.”

“That seems really sad to me,” said Kurth, who has worked in feedlots for about 35 years. “All those crops leave as raw products and when they do, you know what leaves with them? Our children, because they go somewhere for a job.”

For Stapleton, problems such as these can be turned into business opportunities. Willoughby already had the right idea with e-commerce, he said, as digital marketing “is the future.” In Kurth’s case, he continued, “if you want to make a dollar, you wholesale stuff; but if you want to make $5, you retail it.”

From Facebook to Uber, Stapleton said, businesses who “hit it big” almost always begin with the question, “How can you possibly do it?” – in their famous cases, connect people through photos online or break a taxi cab monopoly. Big companies usually succeed, he continued, by “solving a problem no one wants to deal with.”

“People like convenience, people like to support neighbors and local people, but they don’t want [goods] perceived of a lower value,” he said. “It’s all about relationships and customer service.

“A lot of times, the game changer is something unique.”

According to Stapleton, each county has its benefits. For instance, he continued, due to the presence of American Indian reservations, Big Horn County has a “constant inflow” of federal money not available to other areas.

Big Horn County also has business opportunities due to its “rich heritage” in being the home of the famous Battle of the Little Bighorn, he said, and the location of “world-class” fishing from the Bighorn River. His brother lived in Hardin for several years, he continued, simply for the fishing.

“This is such an easy state to attract tourism because we’re the most beautiful state in the lower 48,” Stapleton said. “What it really takes is someone to… say, ‘Hey, let’s put a convention center here that’s not going to be shuttered up with boards on the windows in 10 years.’”

As an example of a community that used one of its advantages correctly, he mentioned Harlowton, a small town in central Montana with a population of about 1,000. Through adding a surcharge to the area’s windmills, Stapleton said, the city’s representatives told him they gained “more money than we know what to do with.”

Clearer communication between among the city residents is needed, Stapleton said, as he believes they currently are too reserved regarding the community’s struggles.

“Some of the business owners, in advance of this meeting, actually contacted me and said, ‘we’ll be at the meeting, but we don’t feel comfortable talking about this issue,’” he said. Some of the problems they cited, he continued, included boarded up businesses along Center Avenue – due in part to high, non-negotiable rent prices – and difficulty in getting employees who would “work hard and show up.”

“It’s great to tell me about it, but I’m not a counselor, I’m not a psychiatrist,” Stapleton said. “You guys need to trust and love each other enough to share that with each other.”

To conclude his talk at 3 Brothers, Stapleton said he’ll continue working toward business solutions for Montana not with the goal of “making friends,” but helping “people become awesome by meeting their potential.”

The Montana secretary of state website is available at sosmt.gov.