Montana’s Statewide Elections have various options for voters with disabilities or voters who need special assistance, including the new Electronic Ballot Request System (EBRS), available for state and federal elections beginning 30 days before election day and through noon the day before election day.

Contact [email protected] if you have a voting accessibility suggestion or concern.

The Secretary of State’s office has partnered with all 56 counties in Montana to offer the ES&S ExpressVote® ballot-marking technology that provides options for all voters including those who have a disability or physical limitations to mark and cast a ballot privately and independently.   The Help America Vote Act (HAVA) requires each polling place for any Federal election be accessible and provide a voting device equipped to allow all voters the means to vote.

The AutoMARK™ and ExpressVote® voter assist terminals are ballot-marking systems that use touch-screen technology to produce a paper record for tabulation. Both are designed to provide privacy and accessibility to all voters including those who are blind, vision-impaired, or have a disability or condition that makes it difficult or impossible to mark a ballot.  They are a universal voting system designed for use by all with an accessible keypad equipped with braille and the ability to use rocker panel and Sip-and-Puff devices.  As a compliant ADA voting solution, the AutoMARK™ or ExpressVote® allows both standing and seated voters the ability to mark and cast a ballot. 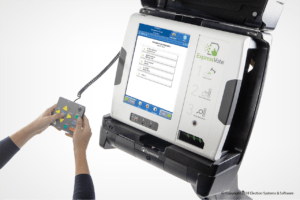 How to use the AutoMARK™:

How to use the ExpressVote®: 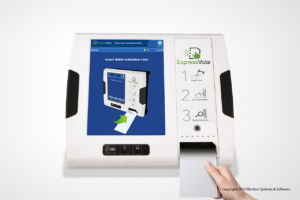 10 Tips for Voters With Disabilities – www.eac.gov

Curbside Voting: Voters who are unable to enter the polling location may ask that a ballot be brought to them by an election judge.