About the State Seal

Home About the State Seal 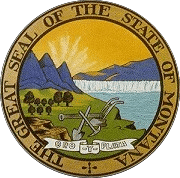 The Great Seal of the State of Montana is a vivid symbol of all that is special about Big Sky Country.

The Great Seal evolved from a basic design submitted by Francis McGee Thompson, a representative from Beaverhead County at the First Legislative Assembly at Bannack, the Territorial capital, during the winter of 1864-65.

Thompson’s design contained the words “Oro el Plata,” two of the riches that gave rise to the nickname Treasure State. This was changed to read “Oro y Plata,” Spanish for gold and silver. Indeed, it is interesting to note that during the first Territorial legislative deliberations on this subject, consideration was given to using the word “Eldorado” instead of “Oro y Plata.” This proposal was voted down.

The seal also features a plow and a miner’s pick and shovel above these words to illustrate the state’s agricultural and mineral wealth. These are surrounded by the mountains for which Montana was named, as well as by the Great Falls of the Missouri River, which so dazzled explorers Lewis and Clark.

The Territorial resolution accepting Thompson’s design was passed on February 9, 1865, and signed the same day by Territorial Governor Sidney Edgerton. The resolution read: “The Territorial seal shall as a central group represent a plow, a miners pick and shovel, upon the left mountain scenery, underneath as a motto the words Oro el Plata. The seal shall be two inches in diameter and surrounded by these words, The Seal of the Territory of Montana.”

The original designers of the seal were members of a legislative committee chaired by Francis M. Thompson, in the days when Montana was still a territory. Thompson was not without some expertise: he had engraved seals for Montana’s first mining districts on the ends of ax handles. The committee wanted to incorporate into the design the essential elements of Montana’s economy and its natural attributes. The first seal included bison and other animals, but these were removed by later designers who thought the seal was too cluttered. Thompson, who came to the Territory from Massachusetts in 1862, returned to his home state in 1865. His original hand drawn design for the seal is preserved in the Historical Society of Montana.

When Montana changed from a territory to a state in 1889, the seal changed as well. In 1891, shortly after Montana became a state, legislators debated the design of the seal at length and suggested adding Indians, settlers, miners, horses, sheep, cattle — even a train or stagecoach. Recognizing that the seal could quickly become overpopulated, the lawmakers finally decided to leave well enough alone. Montana’s first seal had a buffalo where the trees are now, and the falls and river were different, but it was very close to the original.  They satisfied themselves with changing the word “Territory” to “State.”

The Territorial seal was used until the Third Legislative Assembly, when the basic design received sanction as The Great Seal of the State of Montana. The adopting resolution was passed March 2, 1893. Two years later, the man who made the drawings for the state seal based on the original Territorial design, was paid $20 for his work. House Bill 178, approved March 2, 1895, directed: “That the sum of twenty dollars be, and the same is hereby appropriated out of any moneys in the State Treasury not otherwise appropriated, for the relief of G.R. Metten for services rendered the State in the year 1893, drawing designs for the Great Seal of Montana.”

State Seal Not For Political Campaigning

Candidates should not use the Montana state seal on campaign literature.

One element of the Secretary of State’s job is to serve as keeper of the Great Seal of the State of Montana. The office grants permission for organizations or individuals who want to use the seal on materials. That permission is typically not given for political campaigns because it would imply that a campaign already had the endorsement of the people of Montana.

By law, the Secretary of State is charged with keeping the state seal, and is the only one who has the authority to affix it to public documents, including those signed by the Governor.

1-1-501, MCA. Great seal. The great seal of the state is as follows: a central group representing a plow and a miner’s pick and shovel; upon the right, a representation of the Great Falls of the Missouri River; upon the left, mountain scenery; and underneath, the words “Oro y Plata.” The seal must be 2 1/2 inches in diameter and surrounded by these words, “The Great Seal of the State of Montana.”

Original sketch of the proposed seal for the Territory of Montana made by Francis M. Thompson, member of the committee on the seal in the first legislative assembly.

The classic black-and-white version which every state agency uses as a base. Source and artist unknown.